Trash is a major problem in Indonesia which is in the international spotlight. According to National Geography, the country has become one of the top five contributing countries in 2018. According to the Central Statistics Agency, Indonesia produces 64 million tons of plastic waste annually, of which 85,000 tons are discharged into the sea. In 2015, Jenna Jambeck confirmed in her journal that Indonesia is the top five countries that produce plastic waste into the ocean.

Government Regulation No 81/2012 explains that household waste and similar household waste are managed at the Regency / City level. According to the regulation, management starts from waste sources by requiring people, industry, offices, to sort according to type, to the transportation of waste, and at the final processing site. This system does not work well due to inadequate facilities, enforcement of regulations, and low public awareness. To improve the quality of waste management systems, the government publishes Jakstranas (National Policy and Strategy on Waste Management) 2017 which targets 30% of reduced waste and 70% of managed waste in 2025.

Various efforts have been made to reduce the volume of waste flowing into the sea through community-based waste management. The government has implemented the Trash Bank and TPS3R (community level 3R waste processing program) program since 10 years ago. However, the Adipura Secretariat of the Ministry of Environment in 2015 stated that these programs were only able to reduce 2.39% of waste. To achieve 30% reduced waste, the government must be supported by all stakeholders. The campaign to manage waste from the source must be carried out on a massive scale, so that the number of people managing waste with the right system increases.

PT Wahana Anugerah Energi has developed a system for collecting and transporting waste using a smartphone application called Rapel. Rapel is campaigning for sustainable waste management in the household. Currently Rapel provides garbage pickup services, especially for inorganic waste recycling. Application users will be encouraged to sort according to type. Waste that is eligible for recycling will be advertised in the Rapel application. The nearest garbage collector will receive a notification and will make a booking to collect the trash. Waste that is still valuable will be paid by the collector according to the price list in the application. Collectors and users will get prizes from these activities.

The aim of Rapel is to develop a sustainable waste management system from upstream to downstream. In the upstream part, Rapel educates the community to manage waste properly in the household and provides a separate collection system. In the downstream, we build a recycling facility that will turn waste into raw material. Rapel will also manage organic waste by turning it into energy with a digester after successful inorganic waste management. Rapel will educate the public to understand the types of hazardous and toxic waste and provide hazardous and toxic waste management facilities in the next phase.

Role of Rapel in Circular Economy

Environmental degradation has changed the linear economic paradigm to a circular economy. Linear economics is traditional planning with “take-make-waste” steps. That is, the parent material is taken and then converted into a product that is used until finally left as waste. Linear economics will increase pressure on the environment. Therefore, the circular economy was introduced to the industrial world. Circular economics is a regenerative system where input of resources, waste, emissions, and energy leakage is minimized by slowing down, closing down, and narrowing energy and material cycles. This can be achieved through durable design, maintenance, repair, reuse, reproduction, and recycling. This definition suppresses energy and material leakage through regeneration without producing waste. In this system, waste will be processed and returned as raw material so that pressure on the environment can be reduced.

Rapel contributed to the implementation of the circular economy in Indonesia. Waste collected will be sorted and managed in a recycling plant. Recycling waste will be converted into raw material again. The following figure shows Rapel’s position in circular economy. 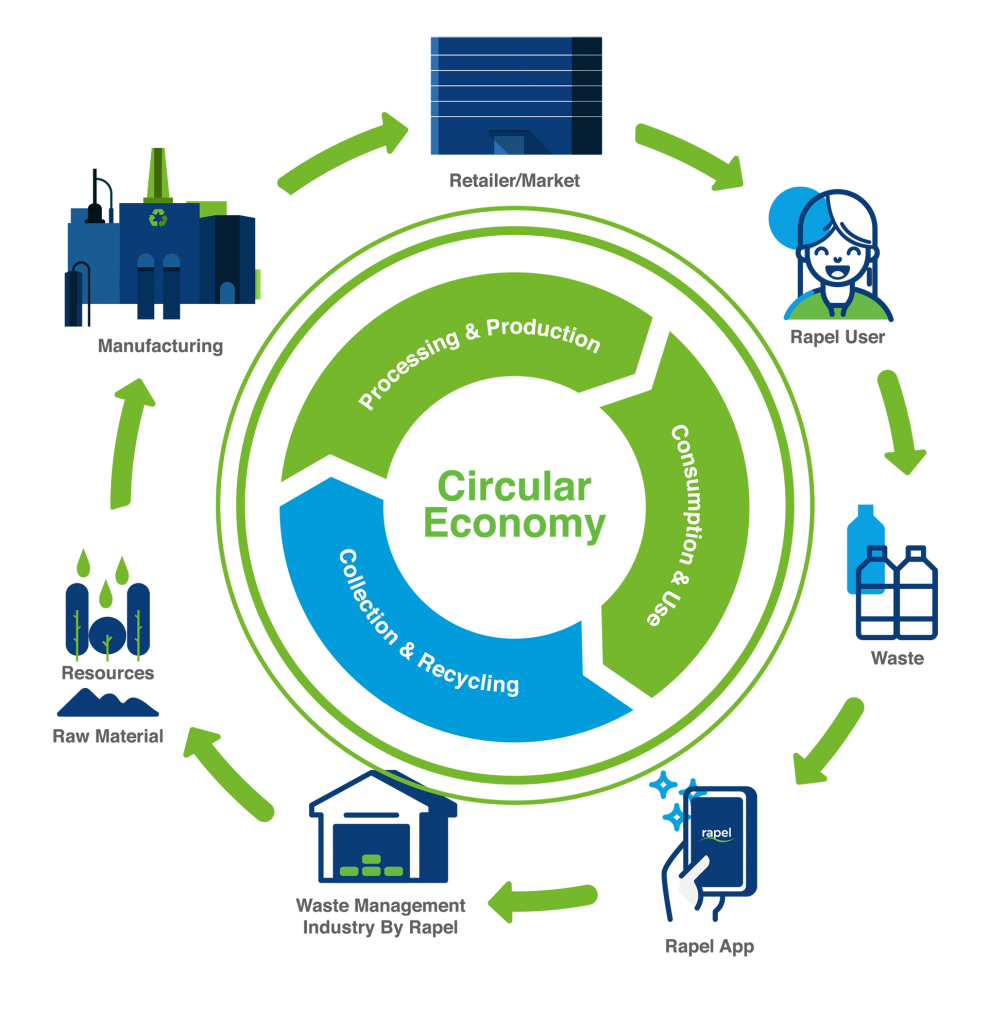 How does Rapel work in circular economics?

Rapel will provide trash bins (Rapel Dropbox) according to its type. Dropbox will be placed in various strategic places to be easily accessed by application users

The disaggregated materials will be taken to the Rapel processing facility to be converted into usable resources such as raw materials (plastic pellets), energy, metals, oil, fertilizers, etc.